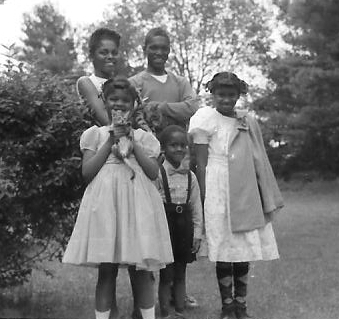 American Heroes, Regular Guys is one of the stories from Volume 2 of the Sketches of Lee Collection titled The Colored Folks Ain’t Gonna Make It by Michael Ward (the little boy in this picture).

The United States Army Oath of Enlistment reads: “I do solemnly swear that I will support and defend the Constitution of the United States and the State of New Hampshire against all enemies, foreign and domestic.

It was September of 1962. The foliage on Bennett Rd. in Durham, NH was an autumnal display of natural pyrotechnics. Explosions of brilliant yellow, deep red, luminescent green, and blaze orange, painted the trees. Riding through it in the school bus was akin to being inside a rolling kaleidoscope. The bus groaned up over the broken backed hump of the Boston and Maine railroad bridge. The kids in the back of the bus catapulted from their seats as the rear wheels crested the rise. Whooping like banshees as they flew out of their seats.

Mr. Doucette, the driver, was in his mid- forties. Although too young to serve, he, like many of his generation, carried within him memories of incomprehensible events that were related to him from the war. And just like every man in Lee, he was building a life, one brick at a time for his wife and sons. He worked two jobs, driving the bus and working as a janitor at MastWay School. Unfailingly polite, he had a quick smile, “Hello” or “Hi” for us when we got on the bus and a “Goodbye” when we got off. Clean shaven, his hair combed and held in place with Brylcreem, wearing steel rimmed glasses. Always neatly dressed, in gray Dickies work shirt and pants.

He navigated the bus down the hill around a corner and stopped at a mailbox. A tall thin wiry man stood next to it at the end of a dirt driveway leading up to a single wide trailer. As the bus approached he was grinning. As it came to a stop he saw me and my sister. His expression slid to alarm and ran to anger. He froze and glared at us. His boys leapt off the bus and ran to him. He shooed them away.

“Go! Go on up to the house! Driver! What are those Niggers doing on the bus?”

“You heard me! My kids don’t ride on a bus with no Niggers. Put them off!”

The driver put the bus in reverse, shut off the engine, and yanked up on the emergency brake.

“You can’t talk about kids like that. Where are you from?”

“Oklahoma. It’s illegal for Niggers to ride on a bus with white kids.”

“This is New Hampshire, all kids ride on the bus.”

“Not with my kids they don’t.”

“If I put them off what are they supposed to do, walk?”

“I don’t care what they do, but they can’t ride on the bus. If you don’t put them off, I’ll put them off myself.”

The Okie moved towards the door of the bus. The driver sprang off his seat and out of the bus, shoving the larger man backwards. The Okie drilled the driver in the right eye with a fist. The driver countered with a rapid combination dropping the Okie to his knees.

“You send your wife down to get the kids tomorrow. If she has the same mouth on her as you, your kids won’t be allowed to ride on the bus.”

The driver climbs back on the bus, starts the engine, releases the brakes, puts it in first and we roll away.

“I’ll have your job, you Son of a Bitch! “The Okie screams after us.

Mr. Doucette spoke to me as he drove, tears coming from his eyes, either from the punch or the emotion of the telling. To this day I have no idea which.

”I was a kid then. We were all kids. We fought those bastards all the way across Europe. Do you know what the hell those Nazis did? Do you know about those camps, did you read about it in school? No you’re too young.”

The memories flooded back, his voice tightening up. Like a coil spring wound to its stop, and beyond. “I was too young to serve. But my best friends died over there fighting them. We didn’t spend four years at war to have to deal with that crap here.”

Slamming his fist on the steering wheel for emphasis: “I’m an American. This is my country. We fought against it over there. Goddammit, I will not stand to see it happen here!”

“Sorry about the language.”

The Okie lodged a complaint with the School Board. They patiently heard him out. Roger Gibb, the bus company owner said,

“Nobody has the right to abuse the kids on my buses.” The school board agreed.

He was a “Regular Guy” whose youth was consumed by WW2. He never took the “US Army’s Oath of Enlistment” yet, twenty years later, a “Fellow American” attempted to deny equality to two “Colored” kids that he barely knew, but whose care was entrusted to him. Without forethought, reservation, or fear for his own well-being, he applied the standard: “against all enemies, foreign and domestic”.

On that sunny fall afternoon in 1962, the late Mr. Gerard Doucette of Rt 152 Lee, NH, became, in the truest sense of the phrase, “An American Hero.”

On Saturday July 16, 2016 I was the “Master of Ceremonies” at Lee New Hampshire’s 250th Anniversary Celebration. Starting at 10 a.m. I announced a 45 element parade of over 80 vehicles, floats, horses, bands, random people, and farm animals. Over the course of the day during the 30 minutes to an hour between my announcing duties, I fronted for my book “Sketches of Lee New Hampshire” at the Information Booth.

Its 4 p.m. The canopy topping the booth is being ignored by the late afternoon sun slanting in from the west. Laterally enveloped by a wall of full spectrum light and radiant heat I felt like a chicken on a rotisserie spit. Artificial hip and all, I’ve been standing in the sun now for over 6 hrs.

A man in his late 30’s early 40’s approached. Introducing myself, I explained that I had written a book about my family’s existence in Lee. We chatted as he browsed through a copy I handed him.

“Are you related to Roger Gibb?”

“He was my grandfather…”

I looked at him. “I mentioned him in a story.”

“$20. Since I spoke of your grandfather in a positive light, it’s free.

By now his wife, daughter, and son have wandered over. She looked at him quizzically. “Why is he arguing with the event Master of Ceremonies?”

Mrs. Gibb looks at me as if I’m crazy. By now most of the crowd has left. It’s not as if I’m doing a land office business. This is frustrating. The man can’t take a hint. But as matter of principle, I cannot take his money either.

“Look, let me read you the story.”

As I said it I looked at his family. The boy, a gangly 6’ 15yr old. He could handle it. Then, an 11year old girl, shy smile, light brown hair flowing in waves down to midback, askew from a day in the sun. She stood leaning back, head nestled against mom’s shoulder. The classic daughter and mother expression of mutual adoration. Pure love, unsullied by the storm of the teenage years lurking just over the horizon.

I had a moment of panic, indecision. Speaking to myself, pained. “Should I do this?” Then resolved. “Her parents will talk her through it.” I begin:

The story rolled off my lips as I painted a canvas of autumnal beauty, and youthful innocence. Mentally pausing for a split second: “Could I do an on the fly rewrite?” That wasn’t going to cut it. Steeling my courage now, apologizing in my mind.

“I’m really sorry little girl, but this is going to hurt.”

The “N word” leapt off page and struck the family like a four headed cobra. Visceral, they recoiled in unison. But once past that point I was all in, powering on, almost bold. Confident that the horror of those wretched words would ultimately be slain by two men who saw: “Kids as kids”.

From “American Hero, a Regular Guy”

Roger Gibb, the bus company owner said, “Nobody has the right to abuse the kids on my buses.”

The school board agreed. Mr. Doucette kept his job.

The Okies moved to Raymond N.H.

“That’s why you can’t pay me for the book. Your grandfather paid for it fifty years ago”.

Roger Gibb’s grandson, granddaughter-in-law, great-grandson, and great-granddaughter stood as statues, mute. For the first time they learned that the battle for Civil Rights in America wasn’t just a “Southern Thing”. Their late patriarch was an unsung hero in that fight. In 1963, he and Gerard Doucette stood shoulder to shoulder, standing firm in the belief that “that all men are created equal”.

Mr. Gibb’s eyes were large, he spoke softly, “I never heard that story before.”

“Well I had to tell it to you. I always read stories to people if they or their relatives are included.”

I shook his hand. The boy stood frozen, his pupils dilated, but in them I could see a glimmer of pride. Mom’s expression was set, her emotions in check. The daughter looked a little unsteady, as if she jumped from a skiff onto land after riding in 4’ swells. There would be a discussion at the Gibbs dinner table tonight. Transformed, they turned to leave.

As a family, no longer oppressed by the heat of the day.

As a family, visibly uplifted, proud, standing tall, close enough to touch, walking away, together.

As a family, aglow with a testament as to the strength of their lineage, of which they had been totally unaware.

Roger and Gerard, your families have learned of the mark you made in the world. Your heroism was not forgotten. Now it will never be forgotten. May your souls above be untroubled, may your sleep be sound. The sun shines a bit brighter today because of your actions 53 years ago.

The advances of the Civil Rights movement in the United States were based on the actions of “Regular Guys”. People who without fanfare or precondition, did the right thing, in the right place, at the right time. The Gibb family’s reaction to my reading puts the wrap “American Heroes, Regular Guys”. I think they liked it.

You can buy an autographed copy of “The Colored Folks Ain’t Gonna Make It” here:

Or you can get a copy from Amazon here:

Buy it on Amazon